This plan was created by another user. Make it your plan
Edit start date
Want to change plan duration?

Madrid is known for its cultural and artistic heritage, lively nightlife, and a dynamic culinary scene.

Madrid is known for museums, historic sites, parks, nightlife, and fun & games. Your plan includes some of its best attractions: explore the world behind art at Prado National Museum, examine the collection at Museo Nacional Thyssen-Bornemisza, admire the striking features of Estacion de Atocha, and get the lay of the land with Walking tours.

To see where to stay, reviews, and more tourist information, refer to the Madrid road trip planning site .

Things to do in Madrid

A city of rich Moorish heritage, Seville is the cultural and financial center of southern Spain, and the site of numerous festivals throughout the year.

You've now added Royal Alcázar of Seville to your itinerary. Start off your visit on the 4th (Sat): contemplate the long history of Royal Alcázar of Seville, then wander the streets of Barrio Santa Cruz, then enjoy breathtaking views from Torre Giralda, and finally pause for some serene contemplation at Catedral de Sevilla. Here are some ideas for day two: admire the striking features of Setas de Sevilla (Metropol Parasol), admire the landmark architecture of Torre del Oro, then admire the natural beauty at Parque de Maria Luisa, and finally steep yourself in history at Plaza de España.

You can plan Seville trip in no time by asking Inspirock to help create your itinerary.

You can take a train from Madrid to Seville in 3 hours. Other options are to fly; or drive. Prepare for a bit warmer weather when traveling from Madrid in January: high temperatures in Seville hover around 58°F and lows are around 43°F. On the 6th (Mon), you'll travel to Cordoba.
more less

Things to do in Seville

Andalucía’s thousand-year-old city, Córdoba, was once the capital of both the Roman Empire and the Moorish Kingdom, representing an alluring mix of cultural and political history.

To find other places to visit, where to stay, more things to do, and tourist information, read our Cordoba vacation planning tool .

You can take a train from Seville to Cordoba in an hour. Alternatively, you can drive; or take a bus. In January, plan for daily highs up to 59°F, and evening lows to 39°F. Finish your sightseeing early on the 6th (Mon) so you can drive to Jaen.
more less

Things to do in Cordoba

To find other places to visit, more things to do, photos, and tourist information, use the Jaen travel route tool .

Getting from Cordoba to Jaen by car takes about 1.5 hours. Other options: take a bus; or take a train. Traveling from Cordoba in January, you can expect nighttime temperatures to be a bit cooler in Jaen, with lows of 32°F. Wrap up your sightseeing on the 7th (Tue) to allow time to take a bus to Granada.
more less

Things to do in Jaen

Granada boasts numerous well-preserved examples of exquisite Moorish architecture, not the least of which is the Alhambra, an ancient citadel and royal palace.

On the 7th (Tue), admire the striking features of Alhambra, test your team's savvy at popular escape rooms, then explore the historical opulence of Nasrid Palaces, then admire the striking features of Royal Chapel of Granada, and finally take a stroll through Albayzin. On the 8th (Wed), you'll have a packed day of sightseeing: get to know the fascinating history of Mirador de San Nicolas and then get the lay of the land with Walking tours.

For more things to do, maps, and other tourist information, go to the Granada trip planner.

Take a bus from Jaen to Granada in 1.5 hours. Alternatively, you can drive. In January, plan for daily highs up to 54°F, and evening lows to 36°F. Wrap up your sightseeing on the 8th (Wed) to allow time to take a bus to Jaen.
more less

Things to do in Granada 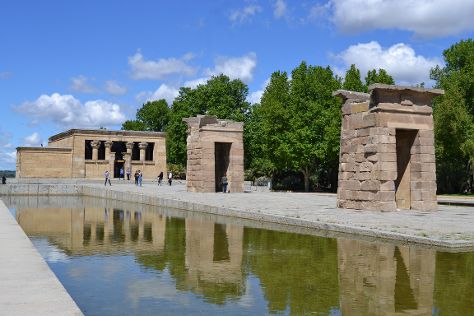 Start off your visit on the 10th (Fri): make a trip to Gran Via and then explore the ancient world of Templo de Debod.

You can plan Madrid trip in no time by asking Inspirock to help create your itinerary.

Getting from Jaen to Madrid by car takes about 3.5 hours. Other options: take a train; or take a bus. You will leave for home on the 11th (Sat).
more less

Things to do in Madrid